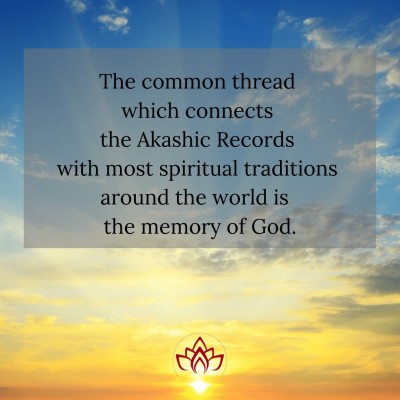 Common to many religions is the idea of God knowing us and making note of the deeds and events in human life.

In India, Yama, the god of death, has a recording secretary, Chitra Gupta, who records human deeds – a record to be consulted by Yama at the time of death to determine the conditions of afterlife.

The Norn of Scandinavian culture, the Fates of Roman myth, and the weighing of the heart by Thoth in ancient Egypt are all additional examples of God’s attention to the destiny of humanity.

In the Christian Bible, the Book of Revelation uses the Book of Life on the day of final judgment.

These stories show that there is interaction between the divine and humanity. Connection. Exchange. An unveiling of the mysteries of the transcendent.

That God knows us and remembers us is universal and not limited to one religion or one culture.

Divine memory or divine knowing exists as a characteristic of transcendent source around the world.

This is an excerpt from Cheryl’s book, Introduction to the Akashic Records.