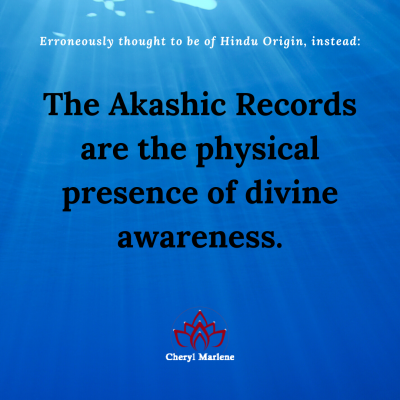 Erroneously thought to be of Hindu Origin, instead:

The Akashic Records are the physical presence of divine awareness.

The claim of Hindu origin comes from confusing the origin of the word Akashic as the origin of the Akashic Records. In English, Akashic is defined as “of or pertaining to the Akasha.” What’s Akasha? In its ancient form, Akasha is a Sanskrit word which literally means sky. As a holy language, Sanskrit is used in multiple religions including Hinduism, Buddhism, and Tibetan Bön, each with differing definitions of Akasha. By mistakenly thinking of Sanskrit as Hindu, the Akashic Records have been called Hindu in origin.

Instead, the connection within most religious and spiritual traditions is divine memory or divine awareness.

Pointing to the all-knowing aspects of divinity, God is perceived to have awareness of human existence, action, and frailty. In many religious manuscripts, this awareness is described as an omniscience which begins even before human birth. In whatever manner the divine is perceived, there is the awareness of a transcendence which is conscious of human life and perhaps precedes human consciousness.

Energetically, the Akashic Records manifest in this conscious flow referred to in many religious traditions, including Hinduism, as the universal presence and remembrance of the divine.

Divine Awareness and the Akashic Records

is an excerpt from 10+ Secrets of the Akashic Records

An easy-to-read guide which sorts ancient myth from modern understanding.