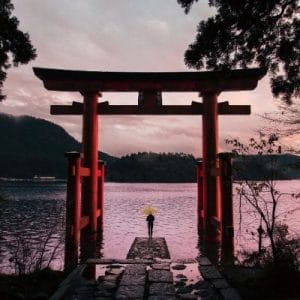 On this day I make a report from Japan.

It’s April 11, 2011, the one month anniversary of the largest earthquake in modern Japan.

It’s also has been twelve days since I arrived here in Tokyo.

I am having a great time.

I am seeing old friends and making new ones.

I am working hard and enjoying every minute.

On the evening of March 30, I came by bus from the airport just as the sun was setting.

Roppongi, the area where I am staying, was lit up like Christmas with all kinds of neon signs.

I was glad to get to my stop. It had been a long flight about half full with only a few non-Asians on board.

The apartment where I am staying is on the tenth floor of a building that I am told is earthquake-proof.

It’s very nice and has everything I could want including a wireless network, a nice little kitchen, a washer/dryer, and an ofuro (deep bath tub).

I have an open view from the balcony and feel that I can curl up and take a break when I need.

The guest event I did on my first evening in town was very well attended — over 40 people.

I have done five days of private sessions so far — about six a day.

I work with an interpreter but get the chance to throw in my own rather-mangled Japanese occasionally.

This past Saturday and Sunday I did my first workshop with 30 amazing participants.

Before I leave on April 19, I will be doing two more days of private sessions and three days of workshops.

The company that is sponsoring my work has been in business since the late 1980’s and is the largest and oldest company organizing spiritual workshops in Japan.

The people that are working with me are all amazingly kind and generous and are taking really good care of me.

It’s fun working with them and seeing the easy camaraderie amongst them.

The people who are showing up at the workshops and private sessions are all equally interesting and serious about understanding themselves and their lives.

Not one of them has missed the chance to thank me for coming to Japan at this time.

I tell them that especially given the circumstances, I wouldn’t have missed it for the world.

The evening after the first day of sessions, I went to dinner with my interpreter.

As we were standing at a large intersection waiting for the light to change, she turned to me and said, “Look around at the people standing here and at all the corners.

“What’s strange is that normally this intersection is filled with people from all over the world. Tonight when I look, the only foreigner I can see is you.”

I have heard this from many people that Tokyo has suddenly been emptied of its foreign population.

While I don’t know what is normal, I do know that I don’t see many other faces like mine and Roppongi is supposed to be one of the main locations for foreign and especially American folk.

The second day of sessions (this would have been two Sundays ago) and which I do in my apartment, in the midst of a session at about 5pm, I felt my chair move, looked up, looked around, looked outside, looked back at the two sitting with me.

We all gasped at the same time and one of us said, “Jishin da!” It’s an earthquake.

And sure enough I could feel the building swaying and the light fixture on the ceiling was shaking.

The buildings outside were also moving.

Just about when you thought it wasn’t going to quit, it did.

Since then, I have felt at least 5 other tremors and two more major aftershocks.

The first aftershock was last week at about 11pm in the evening and was a 7.0 shake off the coast in the same general location as the March 11 event.

That was really scary because not only was my 15 floor building swaying, there was some bumpiness going on, along with a low but audible roar like a train moving by.

The worst just happened about 30 minutes ago.

Starting with the now normal-seeming swaying, the swaying picked up, added some bumpiness and continued way longer than anything before.

It’s quite the strange feeling to have your apartment building behave like a roller coaster — two very opposite ideas that should not go together.

About the time that I felt like it wasn’t going to stop, I walked away from the sliding door and tried to decide if I should put on some clothes instead of my nightgown.

Even now as I am writing this, we are quaking again.

Not as big as before, but definitely motion up here on the 10th floor.

The first big one really did scare me.

And I had to make myself think things through.

I am sitting in a building that is very new and built within the strictest building codes Japan has for earthquake safety.

This building withstood a 9.0 earthquake with no damage.

The likelihood that this “minor” shake is going take it down is very, very unlikely.

Holding my breath does not make it go quicker, but it does make me feel better.

More than likely another building will go before this one, look outside and take a survey.

Buildings and trees are moving, but nothing is crashing to the ground.

Ok, I think I will make it.

And this is probably the biggest weirdness: you can’t go outside, look around and see earthquake damage here in Tokyo.

For such a huge motion in such a large place, this city withstood the disaster with minimal damage.

To see the effects of the quake, you have to look at the people.

One of my very good friends was in another section of town shopping with someone when the earthquake started.

They were told to run from the building since it was old and ended up on the sidewalk where there was some crashing of some building facade.

She is really shaken from the experience and was not very happy to visit my tenth floor.

The same tenseness born from a moment of true panic can be seen in most of the people I talk with, especially the ones who bring up the event.

For a country more or less accustomed to a shake every now and then, this time their sense of firm earth was shaken to the core both literally and figuratively.

Most everyone says of it, “Nagai jikan deshita!” “It lasted a long, long time!”

Of course the other part of this is the nuclear power plants.

Most Japanese that I have talked to concede that they are very dependent on alternative forms of power as well as foreign oil.

But as one friend said she doesn’t think that nuclear power should be the answer if only because of the problem of nuclear waste.

And everyone is shocked that their government would allow a nuclear plant in a tsunami/earthquake region to be lax in regulation and not be required to withstand seismic activity of more than 7.0.

In that area of conversation, when I first got here, the several grocery stores and quick shops I visited were remarkable for what they didn’t have on the shelves: packaged and canned food, and water.

Across Tokyo there has been a run on water and other packaged foods in order to avoid radioactive contamination.

When I was leaving the office last Friday, my colleague insisted I take an umbrella because it was sprinkling outside.

He said that I needed to use it so that I wouldn’t be exposed to any radioactive substances in the rainwater.

Now that ship has sailed because today I went on a walk, went a little further than intended and when I heard a crack of thunder, I knew I was in trouble.

Sure enough, a nice spring shower, me dripping wet trying to get home as quickly as possible.

I am so glad that I came.

I am very fortunate and very grateful to be here at this time.

I don’t know exactly what this will mean for me or the people that I meet.

But I do know that I am glad that I didn’t embrace the fear.

Life is good particularly when you focus on connections with people and the joy that these connections bring.

That’s all for now.

6 thoughts on “Report from Japan”