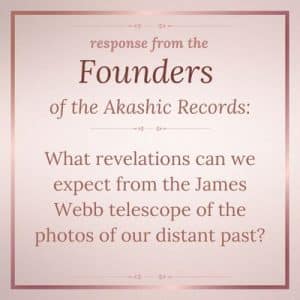 In this exchange with the Founders of the Akashic Records, they answer this question:

What revelations can we expect from the James Webb telescope of the photos of our distant past?

The response discusses the multi-dimensionality of our existence.

What an awesome question! Thank you!

The short way to answer this question: For those who pay attention, we will be able to see that we already live within multiple dimensions.

The photos won’t make sense to someone who’s looking at them from a linear pointe of view or with the chronological past-present-future kind of view.

It only makes sense when you understand that you’re looking at things shifting dimensions.

For example, our moon shifted dimension from another dimension into our dimension about 6000 to 10,000 years ago. This is what they mean about shifting dimensions.

This is the the physicality that we think of when it comes to the galaxies in the universe. They aren’t linear. Just because we can see Mercury right now doesn’t mean it has been there for millions of years.

There’s much more fluidity in all of this than we tend to think.

Additionally, they are trying to explain this so I will understand.

The pictures themselves are not what they think they are.

The assumptions that are inherent in, let’s say, the telescope and the and the way they took the pictures don’t take in the possibility of the fluidity.

What would be unexpected is probably going to take a bit before that even comes up to the surface.

But it has to do with all of our interaction with whatever is beyond the Earth. Our ability to interact with what we call extra-terrestrials is limited by the assumptions we make about those beings and the decisions that have been made by the powers that be about revealing whatever they know.

Revelations of the James Webb Telescope is one of many questions and answers with the Founders of the Akashic Records. Visit this page for more Q&A.

Join a Q&A Session and ask your own questions!