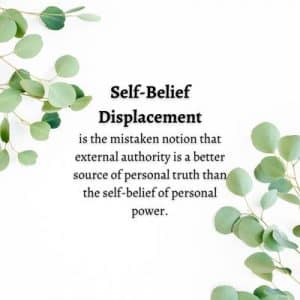 Self-Belief Displacement is defined as:

The mistaken notion that external authority is a better source of personal truth than the self-belief of personal power.

If self-belief as self-confidence and a belief in personal capacity and discernment is strong, Power-Over has a difficult, if not impossible, task in asserting control. A strong sense of self-belief is the foundation for a balanced and enduring sense of self-worth. One cannot exist without the other.

Thus, Power-Over maintains self-belief is untrustworthy without the input and direction of outside authority. By requiring proof of self-value, Power-Over reasons there is nothing within the self which can be reasonably relied on. Further, to be able to live life in safety and beyond fearful attack, the individual must turn away from inner awareness and rely on outside experts who can safely steer away from threat and harm.

This diminishment opens the door for Power-Over to displace personal belief and instill its own belief system. The belief system of the dominant power dynamic supplants the individual’s beliefs. With this co-dependency, Power-Over gathers momentum to spread and assert its agenda and control.

Without self-trust and self-confidence yet with an unquestioned focus on external authority, personal choice is made based on the needs of the externalized agenda. Disconnected from personal power, personal behavior will follow the beliefs of Power-Over even when to do so is contrary to self’s best interest.

The fallacy here is simple. External authority is not inherently better than the self-belief of personal power. With self-presence, personal power expresses personal truth and is the dependable source of self-belief.

Inherent within self is the capacity to learn, explore, and understand. Knowing everything is not a requirement for self-trust or self-belief. With the support of self-belief, one can discern the difference between not knowing an idea or concept and the inherent self-capacity to know and understand.

Yet, without self-trust, the capacity for self-determination is non-functioning and the foundation for self-belief is undermined.

With intrinsic self-worth established, personal power inspires life. Power-Within expands, and personal growth and spiritual practice are natural expressions of the exploratory nature of self.

The focus of self moves from the externalized approach of Outside-in to a trusted internalized process of Inside-out. Self-belief steps forward fully embedded within personal power. The power of self-belief creates and reinforces self-confidence and the reliability and capacity of self.

The release path of Self-Belief Displacement is to come to this awareness:

Because my inner core of personal power is trustworthy, I believe in myself.

Self-Disbelief Displacement is an excerpt from my book, To Do Your Work. To read other excerpts from this work-in-progress, start here.

To learn more about the concepts within To Do Your Work, begin with this article: The Spiritual Practice of Personal Power.