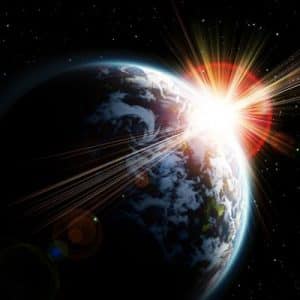 The following is the first discussion I had with the Akashic Records about shifting planetary agreements. For the first time they shared what I now call Departing energy and Arrival energy. Departing in the sense that this is the energy of the past agreements and are now shifting away from human experience. Thus, in the same sense, Arrival energy is the newly emerging form of humanity’s agreements for life on Earth. Ancient Wisdom is the energy and understanding available on Earth prior to the emergence of Departing energy. We live in a time of great shift and the following explains the basis for the change we all experiencing.

Right now on the planet the shifts are not radical except within spiritual expression.  Earth is your physical environment and carryings other names such as Gaia, Abundant Mother, Sky Source and more.  We will go with Earth for ease right now (though there is an ancient name and Sygil as well).

Earth began several eons/yugas ago in a dimension just learning about the finer points of physical manifestation.  Earth had tried each element and combinations of them (including metal [atomic source] and Wood [carbon source]) plus several other elements dependent on other combinations not part of Earth’s current makeup and agreement.  Through Akashic expression she embraced the major four and their sense expression (sound, touch, taste, sight, smell, and intuition) and began a creative dance with one source to express intention to support physical manifestation and expression.  Some of the first forms did not support long term physical expressions.

Literally Earth learned to let go of control and allow Divine Source and Divine Knowing to guide her.  The result was much better and she sustained a full expression lasting the entirety of the ebb and flow of divine expression within her.

As all beings do, Earth also experienced the Eternal Return and after finishing her intention, she rested and then again expressed new intention.

Galaxies are soul clusters in star form.  The collection in a galaxy is there to support intention of all fellow “stars” and “star forms” (such as nebula, black holes, etc.). Just as individuals on earth are connected, Earth has connection with every physical expression within her galaxy.  So galactic consciousness begins with the awareness of interconnectedness through all dimension of galactic expression.

The Rise of Ancient Wisdom

As Earth continued her intention to hold physical expression for herself and then for others, Earth was visited by Star Travelers — Beings who have experienced many physical environments as universal, multiverse explorers.  The presence of star travelers on a planet prepares the planet to support complex life forms.  A Star Traveler is a being with the ability to create, moving potential to form.  The presence of these travelers gives rise to stories of unknown Beings visiting and influencing Earth’s development.  The point is that presence of the traveler ignites the possibility of complex life forms within the energy sphere of Earth.

Development within the expression of the planet can happen in many ways.  Within Earth, her intention was to experience the rightness and fullness of divine flow and divine knowing and within her spiritual/soul expression had yielded to divine flow to come to the fullness and richness of her expression and thus supporting Beings within her with the same opportunity.

Approximately 6000 to 7000 years ago, humanity’s shift in agreements allowed a sharp increase in soul awareness which was difficult at first because physical expression was more limited than it is now.  However, the intensive connected awareness led to great physical advancement and eventually yielded societies with broad spiritual awareness.  Physical expression had reached its potential to the maximum possible within the physical potential.

To shift either physical or spiritual into deeper, more extensive and intensive expression a shift is needed.  The overall goal was a deeper spiritual Earth-oriented expression.  To do this, human experience needed to shift allowing development of the cerebral part of the brain which happened best with reduced spiritual capacity.

Though this also meant that fear needed to take a more predominant role on Earth to support cerebral production.  When the physical and spiritual are in balance within physical expression, fear has no place to fuel or foster.

The Rise of Departing Energy

About 3000 years ago, Human-Earth Planetary Agreements shifted, and the spiritual expression stepped back to allow more intensive physical — especially cerebral — development.  About 2000-2500 years ago, male expression took dominance in the form of power-over and fear became predominate within any physical human expression.

In this period, physical expression flourished and cerebral development began first in a few and soon spread through global procreation.  The overall effect of power-over has been a rapid incorporation of advanced brain activity though as the same time a domination of fear.  While fear on one hand spurs cerebral development, fear also can freeze the ability to act for the best interest of self in the effort to find safety from the effects of fear — namely abuse of power especially by those with physical dominance.  The solution is to begin a shift in agreements which opens the physical expression to begin to absorb the higher level resonances of spiritual expression — which was the original motion 6000 years ago — a motion toward a deeper expression of spiritual-physical within the Earth environment.

The Rise of Arrival Energy

Currently planetary agreements of human expression are shifting to allow a spiritual expansion to follow the physical expansion but not with the intention of surpassing but with an intention to integrate physical with spiritual so human experience and expression occurs across the entire expansion and is not limited or hampered in any way.

The new Agreements of Arrival Energy include:

These are the basics.  More information will come.

Shifting Planetary Agreements is one of many articles contained in the Akashic Mystic Library. This article comes from the category, Ancient Wisdom and Future Knowing.