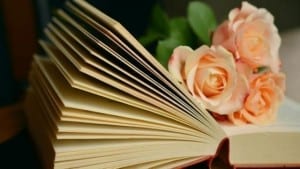 As divine inspiration, seeing the meaning of holy manuscript beyond literal interpretation makes sense because divine source is by definition beyond the confines of reality.

However, James Simpson, in Burning to Read, points to a possibility for our modern-day reluctance to acknowledge divine inspiration in the written word.

Gutenberg’s invention of the printing press, significantly reducing the cost of producing books, combined with a move to translate the Bible from Latin into vernacular language, put new readers into the uncomfortable position of interpreting the sacred words themselves.

In England, when the Catholic Church was abolished and replaced by the newly formed Anglican Church, every effort was made to destroy any associations with Catholic tradition and interpretation.

The written word and its interpretation became the mediator between righteous religious action and illegal, treasonous behavior.

Looking deeper, Simpson also points out that Martin Luther espoused biblical translating not as a way to free the individual to his or her own interpretations, but as the road whereby each individual reads for themselves in the Bible that they can neither escape the authority of the written word nor find within the Bible directions for salvific action.

The reader learns firsthand that not everyone will attain God’s favor, because literally not everyone is written in the Book.

While Luther dismissed as possibilities for salvation both the efforts of good works and divine inspiration, he adamantly maintained that faith alone saves.

From this perspective, reading the Bible becomes a minefield, something one must do to demonstrate faith, but disastrous if the wrong meaning is asserted.

Paradoxically, reading a book devastates the possibility of trusting the intuitive, prophetic voice.

Literal meaning is the safest path, responding to prophetic symbol a road of danger and eternal damnation.

For a deep dive, begin with What is Spiritual Practice?