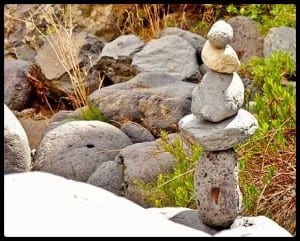 Am I too much? This is the question I left my 25-year marriage asking myself.

Here’s how I worked myself through an answer that not only I could live with — I found an answer that fundamentally changed how I understand me, helping me release years of self-judgment.

First: if it’s true that my marriage was to a boy who expected me to do the emotional heavy lifting in our relationship, then it follows that I have never been in a mature adult relationship with a man — especially one who is willing and able to show up and risk sharing vulnerable, emotional intimacy.

If this is true, then it follows that even though I may have the capacity to reciprocate maturely, I have at best limited experience.

And, OMG! I don’t want to screw up the next relationship.

I don’t want to get in my own way or scare away potentials or fail to recognize reasonable signals because of a lack of experience.

My heart feels so open and so ready to dive deeply and fully and completely and I’m not sure if I know how.

I’m not even sure of how to be just friends.

Men seem to negotiate friendship between themselves differently than women.

Is it OK to treat him like a girlfriend and what does that really mean?

Do I announce it?

Do I make a formal request?

Can we be friends?

I can’t know until the moment of knowing comes.

When possibility stands before me, I don’t want to guess.

I don’t want to wait.

My nature is to reach out and clarify intention.

When I’m not sure, I realize I’m second guessing myself because I don’t want to over power or ask for too much.

Am I really that: too much?

Do I still unquestionably accept this awkward, hurtful label meant to divert attention and lay the relationship and its responsibility at my feet where all failure and disappointment and denial were always my fault?

In the face of new possibility, do I say or do I hold?

Not a dumper, not a you-always-go-first type.

Do I hold still and wait for him to make the approach?

Which means I might wait an awfully long time if I stand on this principle!?

What happens if we are both waiting on the other for really good reasons?

I am learning allowing and I am learning to let go of control especially a control with the illusion that I can head off failure or disappointment.

Or a control which is really a misplaced sense of responsibility for any and all outcomes.

As I reflect on all of this, I am so struck by the prejudice of me as way, way too much.

Am I still feeling bound by this cruel voice, this horrible characterization which has its roots even further back in my life than the boy?

I have always felt like too much and I’m not sure where or how or exactly when this emerged.

But I feel the truth that this has been a long-term feeling which attempts to marginalize me and to demean me and to turn my heart and mind from the truth of my wants and desires, from the ability to trust the inner truth of me — because seriously, Cheryl, you are too much.

Back up, slow down, hold on.

You and what you want is just too, too much!

All of you is not right, too much.

You must let go and not expect too much. Cheryl, it’s your fault because you are too much!

Now when I hear him say I don’t know, let me think and get back with you and never did, I realize what he really meant was I don’t want to tell you, I don’t want to say to you what I think or feel.

Instead I want you to believe what you ask is TOO much!

When I hear his words within this frame, now I get that too much was truly not about me.

Too much was about him.

Honesty and open communication in a relationship was too much for him.

Sharing and truth — again too much. Vulnerability and emotion more than what HE wanted.

It was him who wanted to play small.

It was him who did not like me showing him up and so he made it my fault because my wants and desires in mature, open relationship were for him too much.

Wow! This changes so much for me, in this time and in this place.

I am just right, just as I am.

I am not nor have I ever been too much.

It doesn’t mean a possible new him might agree with that boy in my past.

But that doesn’t have anything to do with me and who I am and who I can be in a relationship with an honest, open man.

And maybe this new him has his own issues of not enough or too much or just not right.

For both us, whatever connection between us offers opportunity to learn we are perfect just as we are and can grow by sharing the wants and desires of our being and becoming.

If nothing else, I feel reassured that my desire for truth and honesty is not too much!

As I think of the last couple of days of learning, I am struck by several awarenesses.

First, I have been in this place of understanding before and feel I have returned to release again through the reassurance within myself of my value and worth as quantities which need no outside validation to exist as treasures of and from my soul.

Over the last four to ten years of my life, this struggle with self-worth has moved from the realm of depleting and deterring to the arena of continued, positive rewarding self-growth and understanding.

I stand here in this moment not because I didn’t get it before — instead I am here because this is the focal point/nexus of my most powerful growth and understanding.

I marvel at how much I gain each and every time I move into this space/view of the deepest part of myself which has also sustained the greatest wounds. I have hurt.

And sometimes it hurts to learn. Yet my hurt fuels the best of me emerging here and now.

Second, I shared the “too much” with an amazing friend who has helped me in the last four years to heal and grow. He spoke of the risk within speaking fact and feeling especially in the face of my unknown.

A deeper layer or the flip side of “too much” is not asking or getting what I want.

Meaning the deflection of the too much accusation is also a denial of what I want and what is important to me.

Another arena of personal learning I recognize. In the face of continual rejection of my desire bundled in the cloak of too much, I learned that asking for what I want was often met with painful rejection which I took to heart as an indication of inherent ill-worth.

I was being accused of lack through my own folly of asking for what I desired.

A pain I learned to avoid by keeping my thoughts and feelings and desires to myself.

Only bringing forward that which I hoped did not upset the apple cart.

What I want can be expressed within two aspects: the fact of what I want and the feeling of why I want.

Both of which are land mines in the field of communication where I am too much.

Yet if I reject this label and claim self as just right, then the potential explosive nature becomes the risk that the other will simply not agree in some way to my request stated as either fact or feeling.

Brass tacks: I like a guy and would like to get to know him more, maybe even much more.

To allow this just right me to state this to said guy and risk that he is not on the same page as me requires that I be comfortable living from the perspective of what I want!

Again this arena of self-desire is greatly familiar and I have conceivably returned to deepen my learning.

Here’s the jewel from my friend which offered wonderful guidance at this point:

Risk is inherent when truth is spoken. Simply because truth is not monolithic or static nor always shared.

Moving from too much and not good enough and I can’t say what I want, I need courage to speak, knowing that I have completely shifted old expectation to a new experience of speaking truth.

Circling back to the prospect of a new him, I realize waiting to be approached is not always what I want or need, and is not really a sure fire way to discern the nature of the person in question.

The speaking of this truth doesn’t need external validation for it to be my truth.

Holding back is a hold back of me and is exactly the place I don’t want to be.

I want to be in the place of speaking my truth and making my needs known.

If the response attempts to demean or reject me that is on the other not on me.

Additionally, I don’t need to treat this him as anything other than the amazing person he is.

Whatever I speak, I do not lose.

I gain myself, my worth, my becoming more than I was the moment before.

Cheryl Marlene, Akashic Mystic, is unafraid of the tough, the raw, and the real aspects of doing deep work. She is the world’s authority on the Akashic Records and consults in the Akashic Records with clients around the world through readings, research, and Akashic Future for futuristic business leaders. Student learn to access the Akashic Records through ZENITH, her comprehensive four-level learning program, and her signature classic, Akashic Records Masterclass. In the field of consciousness, she is known as a futurist, innovator, and master teacher who delivers life-changing lessons with warmth and humor. Her powerful exploration is cutting edge -- providing you with deep insight today to ignite your vision for tomorrow.

Q&A with the Founders of the Akashic Records

What is an Akashic Mystic?