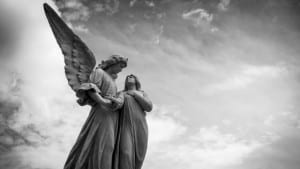 In each case the name of the descendant is given followed by his son’s name, the number of years each man lived, and concludes with the statement then he died.

But of Enoch, Genesis says that this man walked with God for 300 years and then describes a different fate than the other descendants, “Enoch walked with god; and he was not, for God took him.”

Ancient legend and lore maintain that Enoch had superior knowledge and visited heaven where he learned about the nature of the universe, of the angels, and of God.  Enoch wrote books of all he learned and upon returning to earth, he shared his understandings with his family and friends until God took him, this time forever.

In heaven Enoch becomes an extraordinary angel, also referred to as Metatron.  This story is supported by the Book of Enoch, apocalyptic literature last mentioned in the ninth century until its rediscovery in the eighteenth century.

The Book of Enoch recounts Enoch’s journey and discovery while in heaven and, like many similar apocalyptic works, discusses the history of the world, including the great flood as well as the certain death for sinners and reward for God’s own in the end times.  Scholars believe that the Book of Enoch was written somewhere between 50 BCE and 70 CE, most likely in Hebrew translated to Greek, though the extant copies are translations from Greek into Ethiopic and Slavonic.

In other legends and especially within the Kaballah, Enoch as Metatron is the archangel charged with recording the deeds of all creation in the Book of Life.  Metatron also is one of very few allowed to look upon the countenance of the divine, and presumably through this access knows all the secrets of the universe and acts as the mediator between God and his people.

Enoch as Metatron, who are both regarded as divine scribes, is also associated with Thoth, the Egyptian god of wisdom and writing, and the Greek god Hermes, messenger of the gods, who together become the hermetic figure Hermes Trismegistus (Hermes the Thrice Great).

The legends of Enoch and Metatron, like the biblical concept of the Book of Life, also have their origins in Mesopotamia.  Some scholars believe that the later stories of Enoch grew out of or were borrowed from the tales of Enmeduranki, the seventh antediluvian Sumerian king, described as priest, scribe, diviner and expert in secrets, who occupied a unique place between humanity and the divine as the mediator between heaven and earth.

In this assembly, the gods reveal their mysteries and secrets, passing to him great gifts including the tablet of the gods, a liver, and a cedar-rod.

The tablet and cedar rod are both associated with the ability to interpret oracles and divine omens; the liver was considered the seat of the soul in Mesopotamia.

Thus, the gods are passing to Enmeduranki not only divine knowledge but a method to also understand future signs and portents believed to be messages from the gods.

Enmeduranki shares his knowledge with two groups:  his community, the men in Nippur, Sippar, and Babylon, as well as with his beloved son.

Enmeduranki, like Enoch, is considered wise and scholarly and is seen as the guardian of the secrets of the gods.  This human king, diviner and scribe stands within both the celestial and terrestrial realms, able to bridge both because of his access to the tablets of the gods; these tablets open the doors to both spiritual and physical realms and provide connections to the generations before and after.

Enmeduranki’s abilities and Enoch’s appeal comes from this capacity to bring knowledge from heaven to earth, from past to present and into the future in an unbroken line.

Through these scribes, their words and their stories, we are connected with the divine through knowledge and wisdom that help us arrive at meaning.

Both scribes stand between the unknown and the known helping us to see and understand, to live and grow.

The ancient tablet transformed to modern book bridges the gap between spiritual and physical, between heaven and earth.

This article is part of the articles I have written on the personal aspects of growth through spiritual practice. To read more like this, check out What is Spiritual Practice?