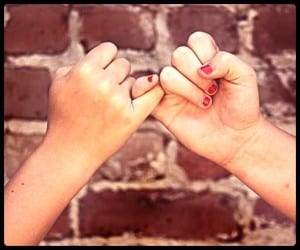 I didn’t really get how I was keeping dirty little secrets.

Pinkie swear. Cross my heart. Mum’s the word. I won’t tell. I promise.

It would seem that keeping secrets is an honorable, respectful act between two people.

When I speak in confidence to another I want to trust that my inner thoughts shared privately are not publicly displayed.

My expectation is my secret is kept.

Yet underneath is a place where keeping secrets is hurtful and harmful and will undermine the health and integrity of a relationship.

Especially when the secret kept hides a truth aching to be revealed. This type of secret exposes both parties by resisting truth.

When truth is resisted, the person who dares point it out becomes the bad guy, criticized and rejected.

If you dare to speak the truth, the defensive reply: there is nothing wrong.

The emperor does have clothes.

How dare you point out what I refuse to see or acknowledge!

In an offensive stance, the person who simply refuses truth will make the effort to deflect and demonize you for wanting truth to be the currency of the relationship.

If you ask for clarity and honesty and communication and receive nothing but silence (or anger) in return, then you are in the position of either pushing back by calling out the truth, accepting you are the problem, or simply staying quiet, keeping secret the refusal of truth.

Keeping secrets which hide truth is co-dependency. However much truth might want to will out from you, it takes two to keep the secret.

I’ve been in this place of keeping secrets, struggling to bring forward truth and being refused at every turn.

The anger, the depression, the hurt — all intense emotions which at first I took on as me and my issues of mis-managing myself.

I was the bad guy for asking for vulnerable, intimate emotions and communication and was met in each moment by a consistent refusal to make deep personal truth the bedrock of the relationship.

I inadvertently kept his secret believing his defense: you are the problem!

And thus, mum’s the word!

Until one day, set free, I saw the dirty little secret for what it was: a twisted, turned-around, inside-out wrangling of deflection away from him and stuck to me like a nasty third-grade boy’s spit ball.

No more secrets which hide truths from me or my partner or friend.

I show up, all of me, soul bared, heart open, speaking honest feeling and thought.